Now if you follow me on Instagram it'll be no secret to you what so ever that I am obsessed with Autumn. It is my all time favourite time of year. Its all the colours that appear and freshness in the air.  Its the time of year that Pumpkins become heavily featured in peoples homes... including mine. Pumpkin spiced anything and everything is left right and centre. The smell of bonfires in the air. it's bliss.

I know that it's not everyones cup of tea and I'm so glad I'm in a relationship with someone likes all of these OTT things I do around the place. We're currently live in a flat and I have still put pumpkins outside the front door (I'm desperate for front porch steps, if your didn't know already.) there's only one other person that lives on our floor.. I bloody hope she looks at them at least once. Even if she does think I'm bat shit crazy. I'm totally ok with that!! 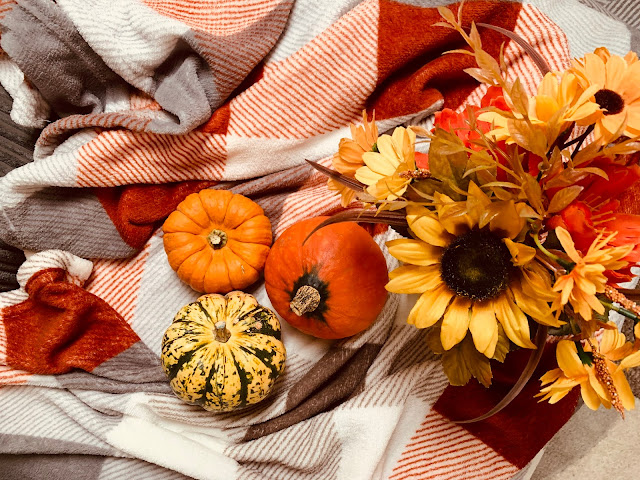 In the last 8 Months I've moved twice, I've moved out of my house I was renting by myself, which became incredulity hard to run alone, it was doable don't get me wrong, I just never had any money left at the end of the month to put into savings. I would like buy a house by the time I'm 30.. that's 3 years away. I just didn't see that happening living alone so I opted for the one thing I never thought I'd do again and that was to move back into my parents. and boy did I do that just in the nick of time. Perfectly timed with lock down. meaning I didn't have to worry about paying all my house bills, I just had my car to run, which I wasn't using because ... well... lock down... so that was pretty cheap to run over 4 months. I know there was a lot of people who struggled massively during this time. I am incredibly lucky to say that I've come out of this stronger. I managed to save a good chunk of money which, all being well be a good little amount to but down a deposit for a house with my partner by May next year.

Yes, I did say partner. He's not been mentioned on here before but you'll hear a lot more from here on out. So if you didn't guess it already.. this was my second move in 8 months. Sometimes when you meet someone, you just know. I actually feel like I have known this man for years when in fact its been a few months.  He says he likes my little touches around the place but we shall see what he says when Christmas comes round. I feel like all these little Autumn decor bits make it feel more homey and having moved twice in a short time frame I haven't really like I've had a "home" as such. living in my parents house that's their house, their home and it has alll their things in it, I had moved out for 8 years previously so nothing there was mine even my old bedroom had been redecorated and I don't blame them, I would have done the same. I'm desperately looking forward to us getting our own place next year seeing as I moved into his place. 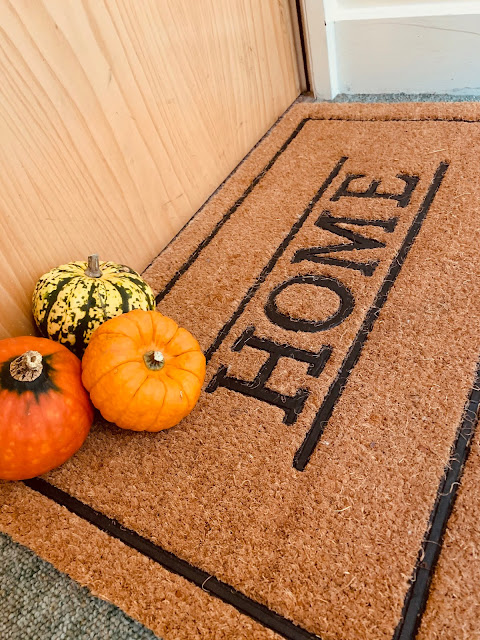 I'll stop rambling now, for your sanity and show you a few of the little bits that I have popped around the place, We all know the good old munchkins pumpkins and squashed that become decor when it come to this time of year and they do actually last quite a while unlike actual pumpkins that's the start to decay after about 3 weeks. I have moved them around a few times, I made a little display on the top of the fridge with them, they also had a little spot on the door mat for a little while though they now have a home with some bigger pumpkins and that's potentially where they may stay, for now at least. 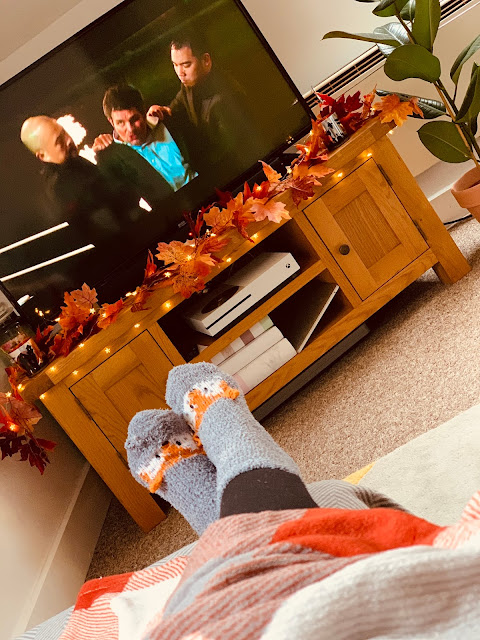 This photo shows off a lot of my favs, my orange checked blanket which is from Matalan, I brought it few years ago but I can confirm that they have them again this year and for only £6 you can't really leave it behind. I have the yellow version of it too and I'm tempted to go back and pick up the red one. I think it'll make a good addition to my collection and come in hand for a few Christmas flat lays.
My little Foxy socks that I am obsessed with, which are really cosy and warm. and super cute, they've got foxes of crying out loud!! I have had them a while though and I'm not too sure I could even tell you where I got them from!
The leaf garland that I have by the TV is a new addition to the Autumn collection and I did get a little impatient with the placement of it and working my fairy lights into it so I have Mike to thank for that and I love how he did it. This is how I know he doesn't mind about these little extras because he helps to make them look better. And I'm waiting on Autumn Wreath to arrive in the post, so keep your eyes peeled on My Home Insta Account for that one. 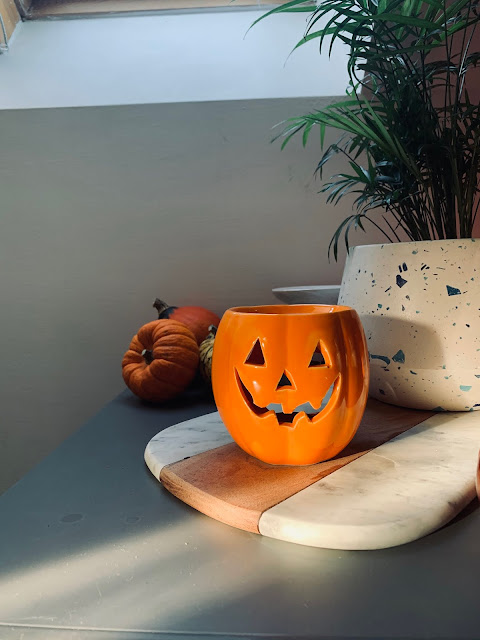 This little cutie is from Home Bargains this year,  he's a little wax melt burner and I love him.  I love lighting him up in the evening and he just just a perfect little addition the living room in an evening he just sits there an smiles at you. 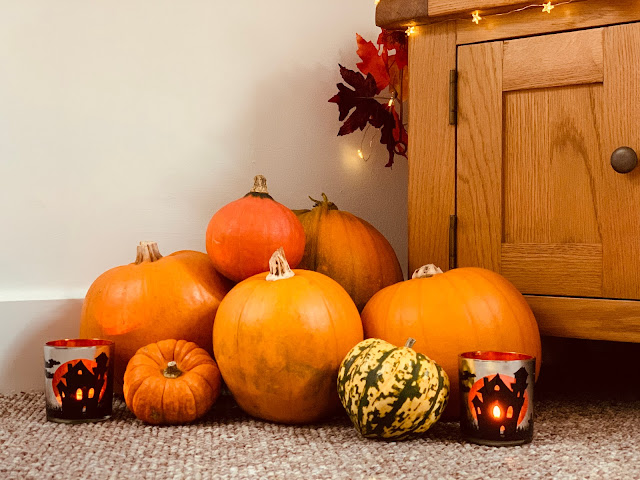 Ft. haunted house tea lights from home bargains a few years ago. I don't know about you guys but I bloody stuggled this year to find Autumn/ halloween home decor bits. TK Max is my normal go to place but when I went in this year I actually found nothing not even any candles. It was all Christmas. I know Halloween is pretty much a right off this year in terms of partys and Trick or Treating, but jeez people still like these little bits and little normality might actually be nice rather than completely boycotting it.  Or is it just me it bothers...? 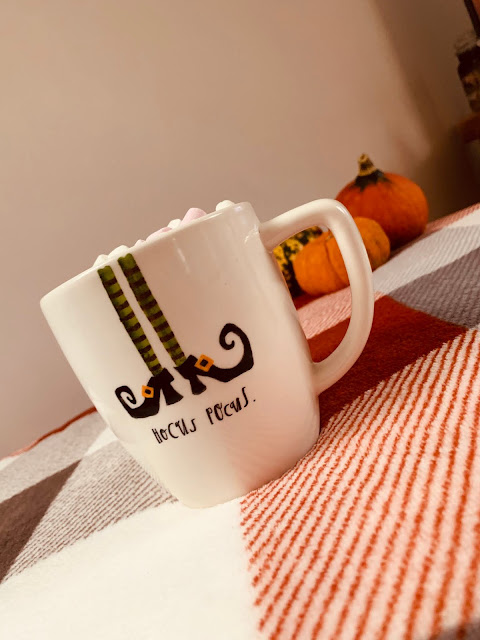 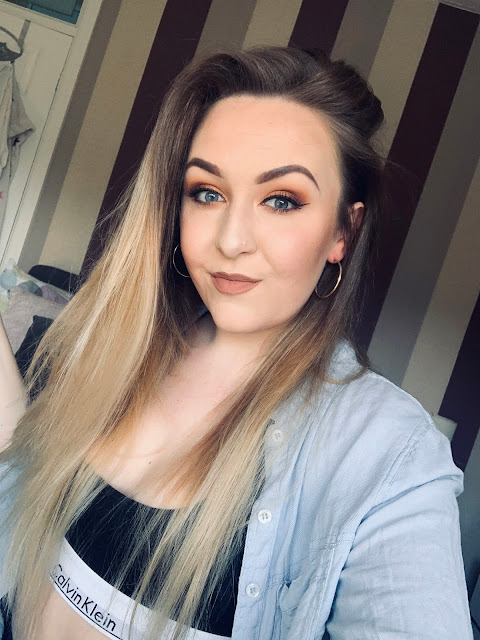 Well, where on earth do I start... If you've been following my blog for while then you're more than aware of how much of a crap time I had during 2019, but you may also notice that that there are no other posts from me until now,   2020 started off looking like it was going to carry on the way 2019 ended... just damn right shit. Even with all the COVID-19 crap 2020 is slowly becoming one of my most favourite of years.  It's taken me a while to fully understand the deffinition of  " Things Happen For A Reason`'   and boy, they really fucking do. But I'll move on to that at a later date.  I want my blog to become a completely clean slate, that being said.. Heres To New Fucking Beginnings   It's. safe to say that all the drama sure as hell sent me down a very peculiar path of mixed emotions left right and centre. I didn't know if I was coming or going. I felt depressed most days and the effort it took me to get out of bed was unreal. but I did it. I did it 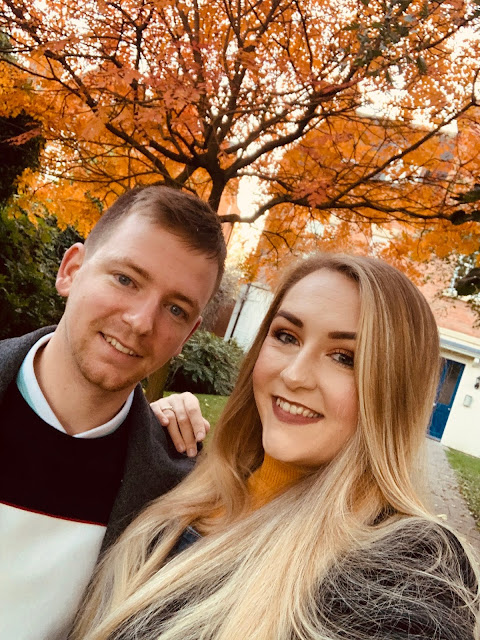 This time of year is my favourite. And one of the things at the top of my list to do is to go on as many Autumn walks as I possibly can.. Particularly in forests or my local park which is particularly beautiful this time of year. Paths completely lined with trees and covered in a blanket of different shades of orange and red.  Theres just something so peaceful and calming about walking through a forest even if you don't have any sense of direction. The last walk we went on a walk and we weren't to sure which way to go and we'd left it quite late on in the day to go out and typically here in England it starts to get dark about 6/7ish about this time of year so we didn't fancy walking till we came out some where so we borderline stalked a couple of dog walkers because we figured they come here a lot and they know where they are going.. it was a wise idea.  But one thing I love most of all is knowing Ive found someone that loves these kind of walks just as much as me. I